It was the end of July in 2001, and I was on Ontario’s Eagle Lake, my favorite lake for big muskies. I was fishing a spot that almost always holds a big musky. For several days I had stayed off the rock structure as conditions weren’t very good, but things were changing. It was just before dark, a storm was moving in from the west, and in the distance lightning was crackling in the sky.

The days fishing had been tough with just a few lazy follows, and I was about three casts from calling it quits when a giant head engulfed a Bucher TopRaider surface lure about 30-feet from the boat. Water flew all over as I set the hook hard and low to the side.

After a deep, bulldogging fight the big fish came near the surface, and my partner Mike Zielonkia scooped it up in my magnum Beckman net. The monster was 53 1/2-inches long and over 40-pounds. 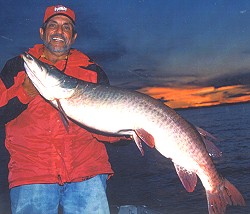 After several good days of musky fishing I was joined by friend Dan Bowman, a very well respected outdoor writer who pens several columns a week for the Chicago Sun Times. We got the first clues the next few days may be special as we raised 3 muskies in the high 40-inch range on the first spot we tried. Unfortunately none made contact with our lures.

On the morning of the second day a large muskie started to follow my top water lure in just a few feet after the retrieve started. With it’s nose just inches behind the lure it neared the boat. It looked like a missile was fired towards us, but it veered off several feet from the boat.

That evening we returned to the same spot about 20-minutes before dark. As we were into a slow, motorless drift I was nearing the end of a cast. Just as I was lifting my double-propped Musky Buster top water up, a huge head came up and ate the lure. The fight was tight in and rugged.

The super fat fish tried to jump several times but was so fat it couldn’t get completely out of the water. Within minutes Dale scooped it into the net. It was the fattest summer muskie I ever caught and was a hair short of 53-inches… another 40-pounder! We raised 22 in 2 1/2 days and caught 3, two over 30-lbs. 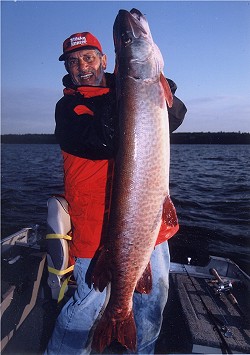 Same time-mid summer, same place-Eagle Lake fishing out of North Shore Lodge. I had musky fished during my week-long bus trip but the biggest musky I caught was 46-inches. I wanted a bigger one and the opportunity to revisit Eagle came after Babe Winkelman and I just wrapped up a musky trip in Minnesota. I had a couple extra days and swung over to Eagle for a few days of fishing. My friend and frequent musky-fishing partner Barry Glosniak was already up at Eagle with two other men. My plan was to “borrow” one of his partners so I wouldn’t have to fish alone. As I recall we caught one or two muskies the first day and raised a decent one at dusk near camp.

The following morning Mike Wenzel and I were going to see if that fish was still around. As we rounded the rocky, wind-pounded point I had a big fish follow in a black bucktail. As it swirled away I quickly picked up a rod rigged with a pearl-colored Lindy Tiger Tube and flipped it in the direction the brute was headed.

As the slowly jigged lure neared the boat I saw the big musky coil and I instinctively set the hook! Two barbs of the trailing treble hook dug into the tough cartilage in the corner of the fishes mouth and the fight was on. The no-stretch SpiderWire Stealth quickly wore out the monster, and as it came close Mike scooped it up in my Beckman net. Fifty-three and one-quarter inches and fat like the main lake, deep water fish usually are on Eagle Lake. Three years and three 40-pounders! It doesn’t get much better than that.

I head up a group every summer to Eagle lake which has excellent fishing for walleyes, pike and bass in addition to muskies. For more information on Eagle Lake contact North Shore Lodge at 800-976-9779 or visit their website www.northshorelodgeontario.com.

Do you have questions or need information on fishing guiding.